Year after year Germans take a big risk and move to China for work. Some expatriates get along there just fine; maybe even spend a lifetime there. Others fail because they are unable to get used to the country, language or culture. Which factors are especially challenging in the intercultural exchange? What causes difficulties even if you’ve already spent years in China? To clear up some of these questions, 30 Germans with recent China experience were surveyed.

Adjustment in China: Climate and Communication

Anyone who has travelled to China will certainly remember the day of their arrival. At the latest when you left the airport it was clear: there’s quite a bit here that’s different from Europe. The respondents, who had not just come for a tour of the country, counted the climate, the air pollution, and everyday tasks like taking a taxi from A to B or shopping as some of the most difficult conditions to start with. The missing social setting was also a strain for them. Most of them noticed quickly in the workplace that communication would present some challenges. In addition the unfamiliar mentality of their Chinese fellows was a source of uncertainty. Which relationships should be paid attention to? What does the hierarchy look like and how should you position yourself within it? When dealing with the at least partially Chinese team the German interviewees greatly missed the clear and direct communication they enjoyed at home. Why is no one stating their own opinion? When does a “yes” really mean agreement? In addition the Germans missed the willingness to take clear responsibility in the group. Rolls were not clearly distributed, critical points were not easy to address, and arriving at decisions was difficult in a team. At not least of all the respondents criticized that they always remained the foreigner in a Chinese group.It was repeatedly positively emphasized though that in China you can find unconventional ways to solve problems quickly and straightforwardly. 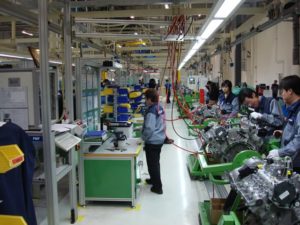 How to lead in China?

Dealing with Chinese Superiors and Co-Workers

Barely one third of the Germans stated that they had absolutely no problems with their Chinese boss. More than half though complained that they were either ignored or patronized. Here too dealing with hierarchies and conflicts were named as difficulties.  Three of the respondents also cited (national) pride and arrogance as unpleasant characteristics of their Chinese superior. The respondents with personnel responsibilities declared almost unanimously that they found the ability to think for one’s self and self-initiative lacking in the Chinese staff. In addition there was difficulty finding the right balance between closeness and distance in contact with colleagues. But at the same time Chinese personnel were praised in the interviews for showing great dedication and diligence as soon as they felt loyalty towards the company.

In response to the question what they would recommend to their German successors in China, the Germans had the following idea: the most common recommendation was to engage intensely with Chinese culture beforehand, for example through destination coaching. It was also mentioned several times that you should learn the Chinese language if at all possible. Specifically it was very important to practice patience, empathy, openness, and humility. A good sense of humor couldn’t hurt either. In general it’s true that you can read up on working in the Middle Kingdom, for example here on the pages of SinoJobs and the ICC-portal. Intercultural training and seminars are very helpful in preparing yourself specifically and professionally for your stay abroad. But naturally aspects will remain that cannot be learned from others. Some intercultural missteps are bound to be a part of this, and regrettably have to be experienced firsthand. But much can be avoided with the right preparation and should be kept in mind so that your own start in China is as smooth as possible.

We’d be happy to construct a training in accordance with your specific goals and needs. Contact us at your convenience, so that we can draw up an individual program with you.