The label ‚made in Germany‘ is especially valuable in countries like China. German product quality is highly valued and brands from Germany increasingly stress their origin in advertising. German citizens also generally have a positive reputation in China. This can already be seen from “de 德” in the Chinese word for Germany (Deguo 德国), which means virtue.

How, on the other hand, are Germans viewed in business? Are they valued as contacts and partners in negotiations? Chinese business manuals give some indication on that matter.

We will be discussing passages from the book International Business Negotiation 国 际商务谈判 (Liu Hong 刘宏 / Bai Hua 白桦, 2011). One book might not appear to be a representative sample, however, similar content can be found in other works on the same matter. They try to summarize the character of German business contacts on a few pages. 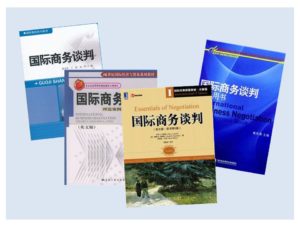 1. General traits of the Germans

“The German nature is confident, careful, conservative, inflexible and strict, however, at work they distinguish themselves by planning carefully, adhering to efficiency and striving for perfection.”

2. The Germans before negotiations

“German business people value concrete results and put emphasis on planning. Their work ethic is that of diligence, they carefully prepare for negotiations and do not flinch from investing a lot of time and energy into researching the real business situation, solvency, background and market position. That way they are in an advantageous position from the start.”

3. The Germans during negotiations

“While negotiating their systematic thinking and logical [argumentation] is very strong, their expression stern, they are determined and follow a strict rhythm. […] German business people are confident and stubborn. Germans pay careful attention to their outer appearance, their ethnocentrism is quite pronounced, Germans are headstrong and haughty, they lack flexibility and the willingness to compromise; in the last moments before sealing a contract they often try to wring concessions from their counterpart with all means.” (International Business Negotiation, p. 239)

Do Germans have an image problem?

In this particular and in similar manuals, German business people are not presented in a favorable light. Other books go even further and explain that Germans are completely devoid of humor and narrow-minded even in their free time. This picture stands diametrically against the impression one normally has as a German in China.

At this point it should not be forgotten that German business manuals for China also paint a scary picture of Chinese counterparts in business relations. Ironically, they list traits similar to those which have been attributed to Germans in the aforementioned examples: perfect planning beforehand, unpleasant tactics at the end of negotiation etc.

It can only be speculated how negative generalizations and exaggerated stereotypes from the literature like these influence the actual behavior in business communication. In order to find out, you would first have to know who is reading these manuals and how serious they are being taken.

One thing that is for sure is that a pessimistic view is not necessarily helpful to build great business relations between German and Chinese parties. Maybe we should hope that these kinds of manuals are collecting dust on the shelves?

Did you experience and problems with stereotypes in connection with business in China? Feel free to share and join the discussion.

If you have any more questions about the image of Germany in China and the consequences for German-Chinese business relations, please contact us with any request: http://www.china-wiki.de//european-companies